Digital marketers started considering Amazon Ads a part of the Triopoly of digital advertising together with Google and Facebook a few years back. And rightly so. 2020 was the year Amazon firmly hit the radar and announced its intention to stay.

This doesn’t mean you shouldn’t be counting on Google Ads and Facebook Ads.  It still makes me laugh a little when I hear people say “Facebook is dead” or when they are looking for “a Google killer”. With their Q4 ad growth of resprectively 22% and 33%, those are hollow considerations. Amazon Ads, however, has grown even more impressively at 66% in Q4 2020. 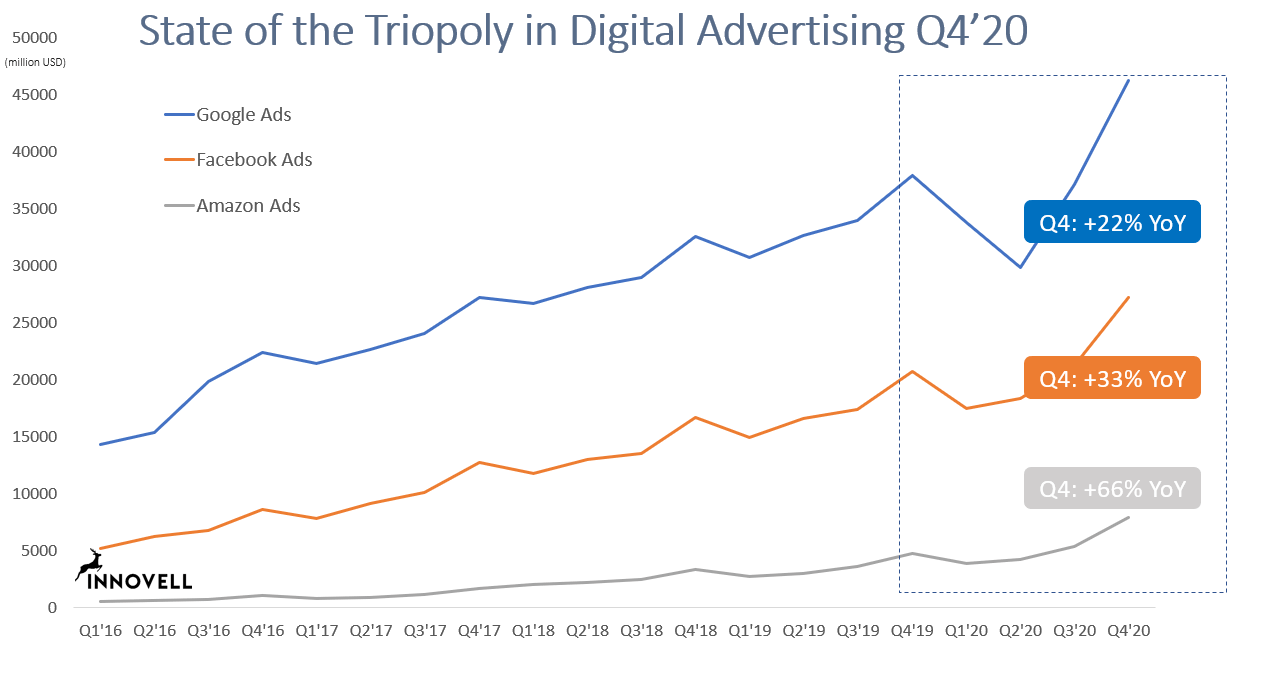 Whereas past years of quarterly fluctuations clearly indicated a peak in Q4, the COVID19 lockdowns in 2020 changed the landscape. There was an e-commerce peak in Q2 when the pandemic was at its first high, and the pattern of a strong Q4 was even stronger than usual. If there were ever a hockeystick curb to be trusted, it is the yearly e-commerce sales distribution.

The growth of Amazon Ads is around double the size of its e-commerce growth. Most of Amazon advertising happens via Amazon Sponsored Ads which are 100% internal to the platform. A less significant part is the Amazon DSP which also has the majority of its’ inventory inside the marketplace as well as on other Amazon properties such a s Twitch and IMDB, and finally a smaller proportion targeted outside of the Amazon univers via ad exchanges.

What is the most impressive about the growth of advertising, is that it has been consistently outgrowing the size of its media for several years. Perhaps the growth rate will have to slow down to come closer to the e-commerce growth rate, situated at 30-40%.

The triopoly in digital advertising composed of Google, Facebook and Amazon, now represent around 3/4 of digital advertising. Global advertising stagnated in 2020 according to Statista, but not for the triopoly which won marketshare. Within the triopoly, Amazon Ads is catching up on its peers. It represents around 29% of Facebook and 17% of Google Ads in Q4. Even at those impressive growth rates, it won’t catch up with them until some time in 2025, but it has firmly established its place in the media landscape moving forward.