Google Ads versus Amazon Ads: Who Eats Who? 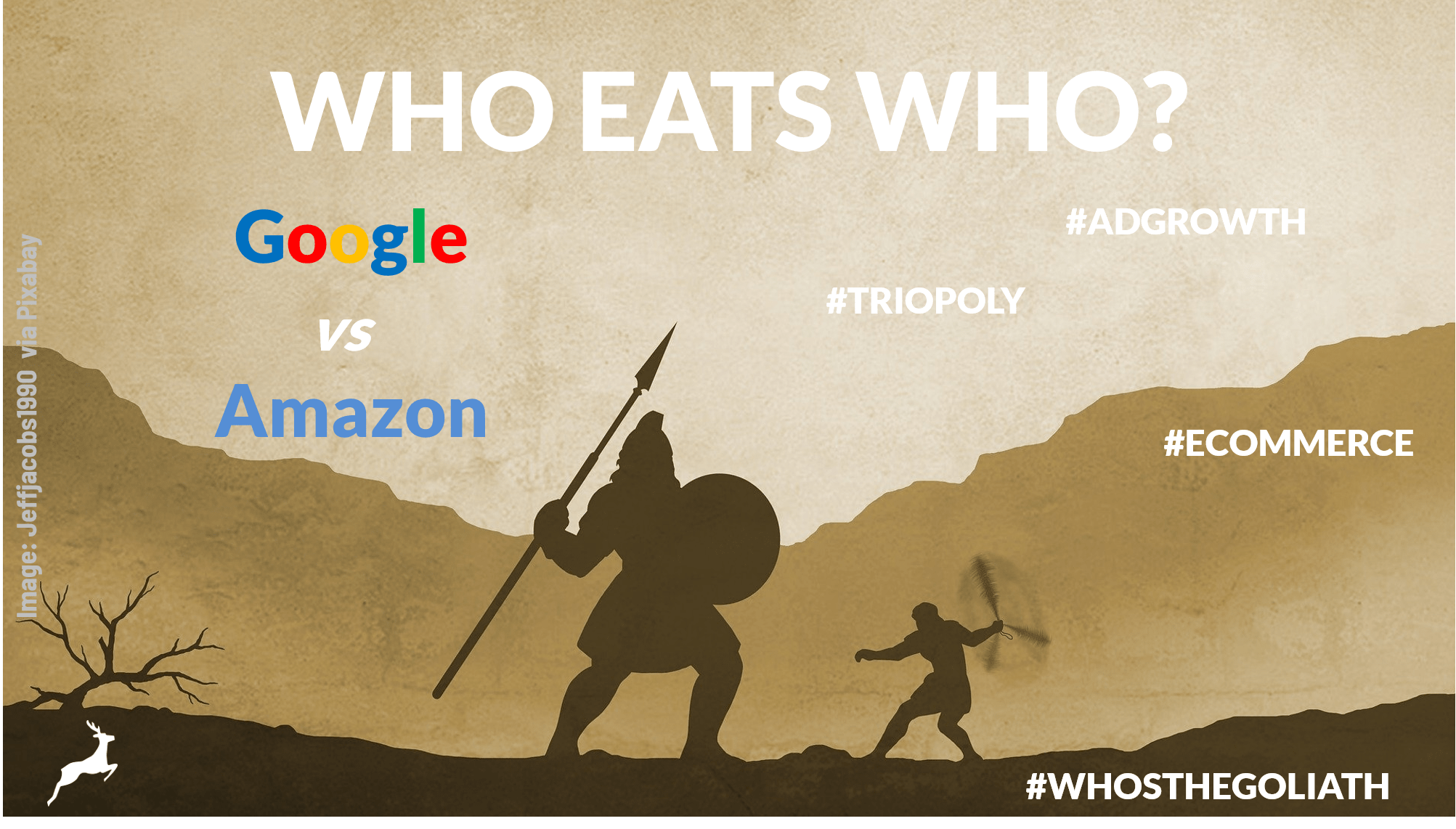 Google Ads versus Amazon Ads: Who Eats Who?

Some 12 years ago, I was point man for all European Google Ads spend for a large media agency group. At the time, our claim was to be the biggest spender on Google Ads. And whereas it didn’t provide us with any monetary benefit, kickback or commission, it did give us some prestige, some clout, and a few privileges. We were the number one revenue stream, after all.

Fast forward to the 2020’s: Amazon is the biggest advertiser in the Google Ads auction. My good friend Mike Ryan, calls it the “Elephant in the room”. When the elephant makes a turn, the room is shaking, and sometimes things are breaking.

In the midst of the pandemic, we saw signs of Amazon pulling its advertising on Google Ads. Whether all advertising was stopped or this was only partial or local, we do not know. What we do know is that it coincided with the first ever negative growth quarter in the history of Google Ads. There was of course a generalized drop in advertising spend across all media, but Google took the biggest blow. There must have been some painful video conferences taking place in that quarter.

Let’s not be carried away by that fact, however. With its 69% YoY growth in Q2 of 2021, Google Ads has recovered from the blow. It is also still 6-7 times bigger than Amazon Ads and almost double the size of Facebook Ads. It had been a while since Google Ads had experienced higher growth than Facebook which only reached 56% YoY growth this time around. Surely, this must confirm have been overseen by those thinking Facebook advertising has played its role out. 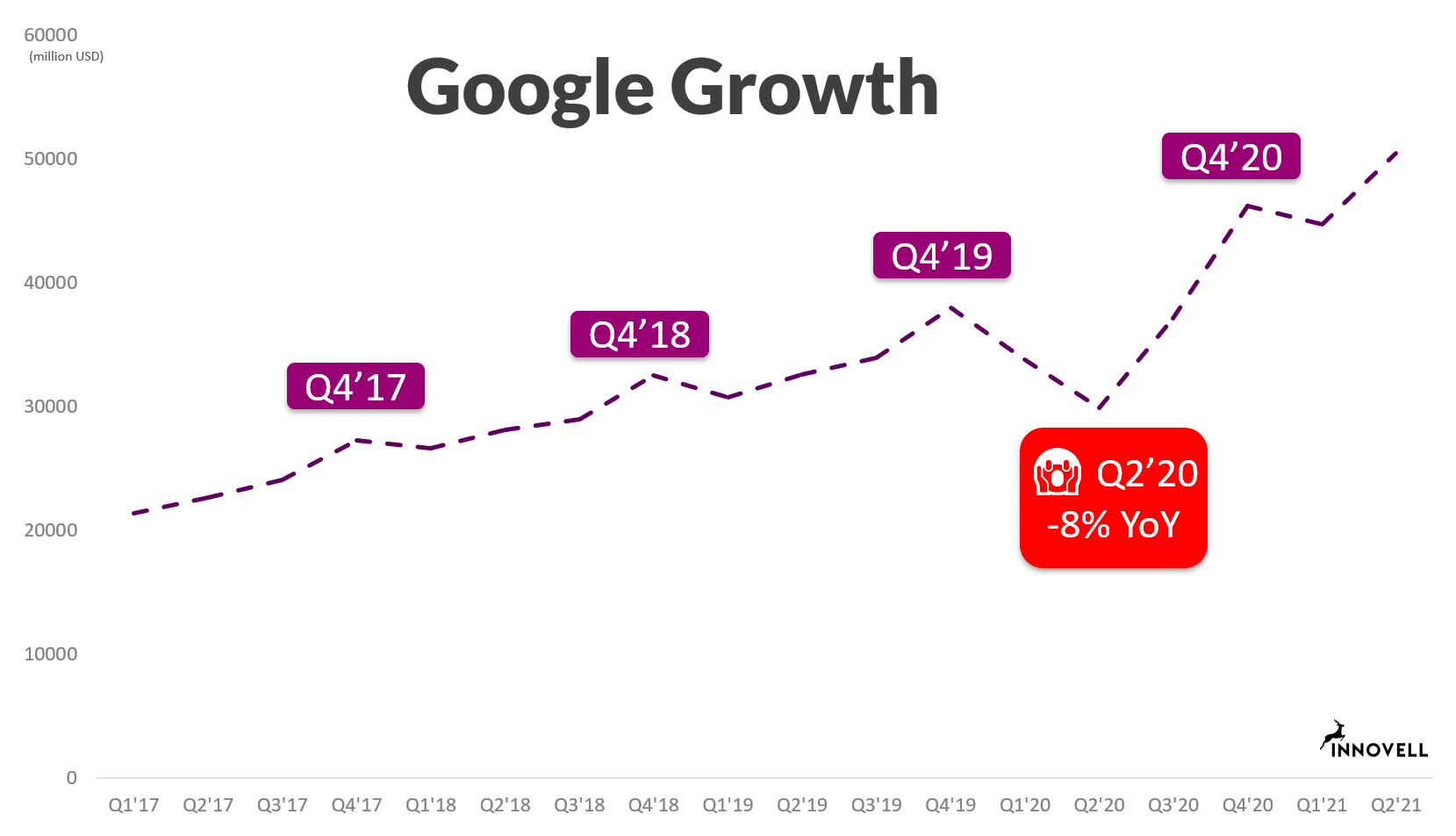 Are we through with the pandemic yet in Q3 of 2021? It doesn’t quite feel that way, but for sure, digital advertising has surfed the wave for 18 months at this point in time. Growth rates for Gogle Ads, Facebook Ads and Amazon Ads were 69%, 56% and 87% respectively in a year on year perspective for Q2 2021. All-time highs since 2018 for all of them. When we compare the sum of the three ad platforms’ revenue to the worldwide digital advertising spend estimated by Statista, they represent 75%. It is the rise of the triopoly. Digital advertising has indeed survived and recovered from the pandemic.

In my quarterly recap on the Triopoly of digital advertising, Google Ads versus Facebook Ads versus Amazon Ads, I dubbed Q2 of 2020, “Christmas in May”, as the seasonal spikes of Q4 was suddenly equaled by a Q2 spike in ecommerce which was a high as we would expect the end of year season. Would it all come back down? Had everyone now spent all their beer money? Not quite, the Q4 spike was back as well and a new pattern was showing. 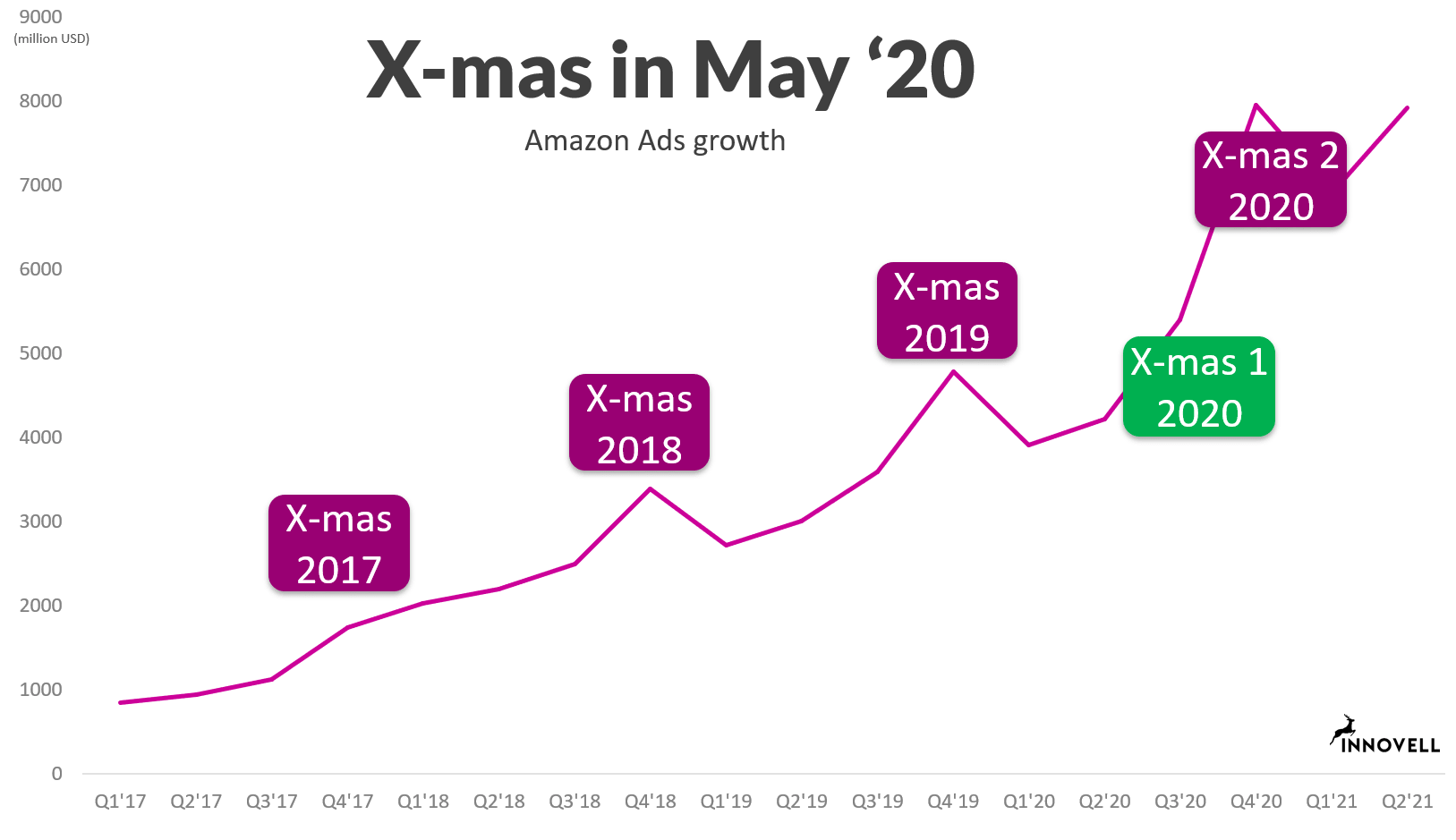 We detected anecdotal evidence of a shift of budgets within the Google Ads mix in our research for the 2018 Paid Search Trends report. We believe this trend has existed for the past 10 years. Text ads budgets are shifting to Shopping ads. We could call this the rise of retail media, a term that has become popular alongside the rise of Amazon Ads.

I am tempted to give this a less flattering name, such as the tyranny of last-click attribution. Tracking on the internet becomes harder the further away from the measurable conversion you get. And conversion tracking has been one of the keys to the explosion of digital advertising. Comparatively, advertisers always favour last-click. It is easier to measure conversion on a marketplace than in an influencer campaign, but does that mean the marketplace is more important than the influence generated from reaching out to wider audiences?

A shift from Google Ads to Amazon Ads?

Is this a story pattern that repeats itself? In the 1990’s, Google managed to sign a deal with the market leader for internet search, YAHOO! to provide the backfill for organic search results on the the catalog. This coincided with Google becoming a household name, and as we all know, the leading search engine is now Google and Yahoo! has all but disappeared.

Is Amazon draining Google and winning the battle of product search in the process by being such an omnipresent advertiser on the search engine? Or is it on the contrary Google which benefits from the surge of Amazon to monetize its huge covering?

Viewed from the trenches Google and Amazon are not substitutes

For large online retailers, there may well be a need to aim for native ecommerce in each available online media channel: provide a native ecommerce experience on Facebook and Google, just like the one Amazon provides. But for most merchants, the duality of Amazon and non-Amazon is a really complex setting to be in.

Seen from the trenches, Amazon is fast and dynamic, but merchants would much rather drive traffic via Google to their website where they can generate higher margins and a better client relationship in the long run.

Whenever I am in a discussion where both Amazon Ads and Google Ads are discussed, they are never seen as direct competitors for a budget line. They are separate universes an advertiser will consider strategically and in most cases want to address separately to get the best of both worlds. In some cases, Google Ads can also be an external advertising challenge for Amazon, something the ecommerce platform is incentivizing as of late.

Amazon Ads is booming but it would be wrong to say Google Ads isn’t. The big difference between the two is that retail media is growing at a much higher rate than search. Additionally, Amazon Ads has created an advertising product which merchants can hardly live without. That in itself doesn’t guarantee sustained future growth, but at the moment retial media and Amazon Ads are the winners of the day.