Can we just agree once and for all on what we call this? SEM, SEA, PPC or Paid Search

It’s easy for the SEO guys over in the other alley. They do SEO – Search Engine Optimization. Although nobody understands what they do, everybody knows what it’s called. Over here we do Paid Search, also called SEM, SEA or PPC – sometimes even Adwords or « buying keywords » depending on who you are, where you live and what you do in life (and maybe how old you are). Everybody knows what it is all about but nobody knows what to call it. So can we just agree once and for all among us that we call this… hmmm. How about you give your opinion by answering this survey, click right here please?! 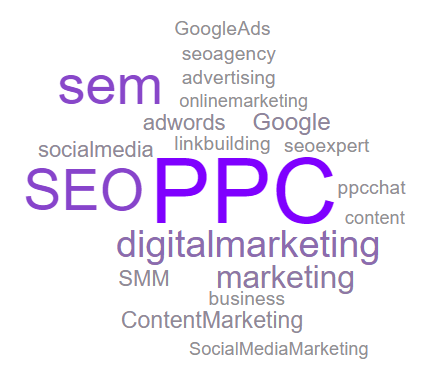 We tried to find the answer on Twitter by looking at related hashtags and as we see in the wordcloud the dominating term seems to be PPC.

Actually this whole activity started out as “Sponsored Links” and was invented by a company called GoTo who made an auction-based listing when you entered a query and then became Overture and then was acquired by Yahoo and then were possibly melted into what is now Bing. Nobody says sponsored links anymore – it doesn’t even show up in the word cloud – but pretty much all the other variations are still used. In my experience there are some geographic trends that I will try to lay out for you below. 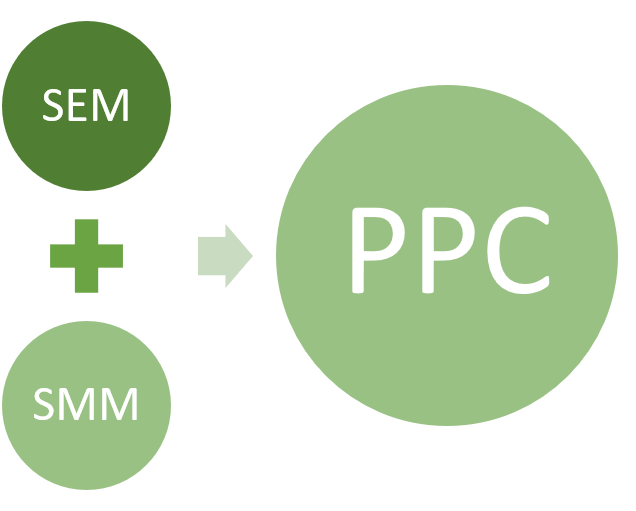 US and UK: People (mostly) say PPC and then Paid Search to be more specific. PPC is the abbreviation for Pay Per Click and in theory is much broader than just Paid Search (would include Paid Social and Native advertising on Outbrain, Taboola etc which is also using that payment model). The term is actually misleading when you do PPC on a CPM (cost per mille) basis or on a CPA (cost per acquisition) basis which can easily happen in a “PPC” campaigns. And now there is of course the People’s Party of Canada and the PPC19 messing up the twitter-sphere…

In Spanish, PPC would also sound like a political party – one of them is PP another PSOE. So they haven’t been so picky about wanting to turn it into Spanish. They use the term SEM (for Search Engine Marketing) and it is pronounced as a word.

This wouldn’t work in France as people could mistake

Yes, truly, the language of love – “on s’aime” = “we love each other”. No, serious, they would never get any work done.

And there is also a strong history of defending the French language and laws enforcing a certain percentage of French words in advertising and media. However, despite honorable initiatives like calling this literally “Publicité dans les moteurs de recherche”. Well, try putting that in a tweet. It is almost over before you can say anything else. Or how about an abbreviation for it PDLMDR. That certainly did not show up in the wordcloud.

There was a bit of a trend for hybrid terms like “Search Payant” at one point but really, this has ended up being called SEA – abbreviation for Search Engine Advertising – and it is pronounced S-E-A (pronounced in French, so there you have it!). Fun fact here, do you know what a Walkie-Talkie is called in French? No? Well, it is a Talkie-Walkie. Seriously!

If you have made it so far into this article, you will have understood that semantics in search are seriously messed up and we have therefore taken the initiative to decide what we should be calling this once and for all. Every vote will count and we would urge you to respond to this survey and share it wide and far beyond. We need this. Once we have all agreed, we will publish an article to provide the ultimate answer.

Participate, share, promote this and be patient, enlightenment will come!