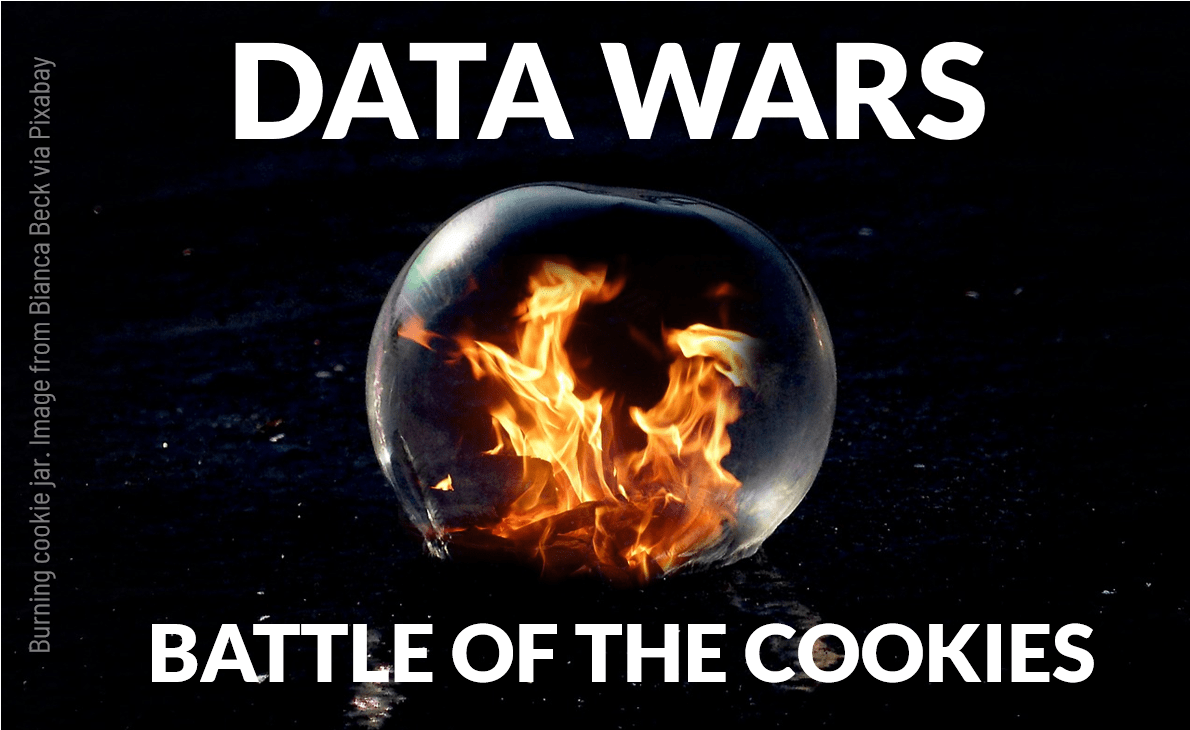 Johnny was weary. He felt caught between countering forces demanding his allegiance. He had fought in the Battle of the Browser and knew that the long-term consequences of which side he chose to support could be important. It was still the same war the giants were fighting. The War of Data. The giants had an insatiable thirst for more data. They would ingest petabytes of data in one draw and spill it into their inner lakes of data patterns, enriching here and there, invalidating in other parts. But having acquired the data once was not enough, they constantly needed fresh data to ensure the value of the data they already had.

In the Battle of the Browser, it had been the soft components which had been important to win subjects over to their cause, but in the Battle of the Cookies, it was privacy that was at stake. The White front were eloquently addressing their subjects describing how they would do anything to protect them and that the Blue front was out to exploit them. The argument was compelling. After all, subjects had grown fearful, like Johnny, of constantly risking cookie attacks, and weary of repeatedly moving through checkpoints to allow or disallow dataflows. It provided them with a feeling of false security.

It was certain giants’ practices of covertly harvesting data in the other giants’ gardens that had triggered the Battle of the Cookies. The White front had adopted a defensive strategy dubbed internally as the antibiotics initiative. They were willing to partially break down and renew their own systems if this remedy could harm the other giants in greater proportion than themselves. Who had the most to lose? Clearly the Blue front. But in reality, removing the cookies didn’t enhance privacy, tracking didn’t go away and the total sum of data would not diminish, only be redistributed. Johnny couldn’t help feeling that was a hypocrite stance.

For a while, Johnny had considered joining the rebel front over at Adblocking, but he feared their leitmotivs too. Who financed them? When they only partially blocked data flows, how were those deals struck? And then he was not ready to wear their special outfits which felt a bit like deprivation of freedom to roam.

The easy choice seemed to reject the Blue front who had been known to greatly surpass their remit in exchange for their wonderful, fun and engaging experiences. They harvested all the data they could and by any means possible. There were rumours of shadow profiles, of master databases, of initiatives influencing presidential elections, even. It was ugly and an abuse of trust.

Johnny felt squeezed between hypocrisy and abusive practices. The digital revolution was far from what he had imagined. It was supposed to bring more freedom, more equality of opportunity, more literacy, more intelligence to all. Instead it was creating a divide, it was becoming compartmentalized and entirely driven by commercial interest. This Cyberspace is not quite the superconsciousness we were expecting to encounter at the end of the journey.

Apple has released its IOS 14.6 which effectively allows users to disallow third-party cookies on iPhones, Ipads and anywhere the Safari browser is used. Google has announced the phasing out of third-party cookies too. This is despite using them heavily in its own advertising solutions. A new targeting solution based on “cohorts” – groupings of similar profiles – going under the name of FloC is to replace the third-party cookies for Google. Microsoft Advertising on their side is working on a similar alternative named Parakeet. Facebook has the webs’ most advanced targeting engine for advertising which is its sole revenue source. It relies in large part on third-party cookie data in many ways, same as Google, Amazon and the entire digital advertising industry.

Marketers are having great challenges with these platforms. This is not new. And it is not even because of cookies. Ever since Facebook disallowed Google analytics on a company’s page, being able to understand user interactivity across a brands own content across the web is virtually impossible. The issue probably reaches even further back than this barrier between Google and Facebook. Digital marketing platforms are blocking data flows between them.

It is scary for an end-user to discover just how much information these platforms know about them. I have experienced this by showing their Google Ads Settings or Facebook Ads Settings to people during training sessions. And we also had laughs when someone would try to figure out why something they hated was showing as an interest, or why everybody is supposedly interested in American Football and BMW cars if we were to believe those settings. Facebook thinks I like penguins and the River Thames, so we are clearly far from George Orwell’s Big Brother. These platforms don’t share the data and cannot really understand the data they are monetizing. They repackage these partial data views and sell them off to marketers.

Third-party cookies were one of the few ways marketers could build up a richer view of a user journey across the internet. That capability which becomes creepy when it addresses one user or a small user group, is something marketers will no longer have access to. Maybe this is a good thing.

However, the tracking doesn’t go away. Simply the access will now be reserved for these digital marketing platforms themselves to monetize. The battle is not so much about protecting users’ privacy as it is about owning their data for monetization purposes. Clearly not the internet Tim Berners Lee envisaged when he invented the world wide web.

Marketers will survive. They just need to resaddle and rethink the way digital advertising works. Hopefully this will be for the better.

The question remains whether respect of users’ privacy will improve in any way. I am crossing fingers for that while I am expecting cost of digital advertising to go up in coming years.