The 4 Growth Riders of Amazon 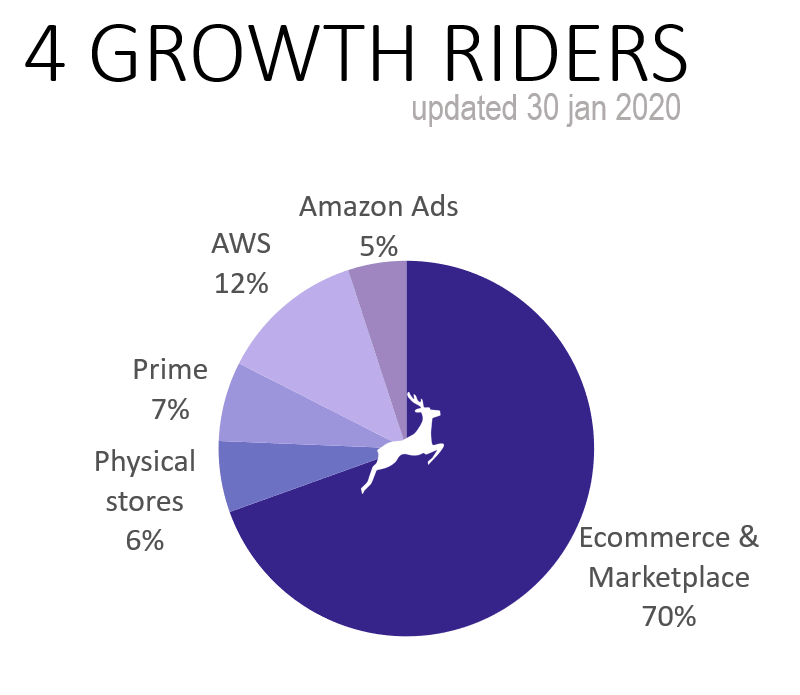 It is fascinating to see the growth rates at which Amazon has been operating for the past year. A revenue growth rate of 30% for a company that big is exhilarating. That being said, it must be really hard to live up to expectations when you are so high up in the sky.

While we are really curious to see the 2019 Q4 results from Amazon published on 30 Jan 2020, we have been analyzing the data from the past couple of years, to understand the components of growth. Let’s start with some more general observations we have made:

In this analysis we have merged Amazon Ecommerce and 3rd party sellers into one category which we refer to as “Ecommerce and Marketplace”. The higher growth segment of the two is the marketplace but it does not come close to any of the Growth Riders that we are focusing on. In 2016, there was no revenue from Physical stores and Amazon Ads (this is accounted for as the “Other” category in Amazon quarterly reports) only represented 2%. In 2018, those 2 segments represented 12% of Amazon.

Amazon Web Services is a strong business segment. Already at 9% in 2016 it continues to grow faster than ecommerce and will likely reach 13% in 2019. (We are using projections for 2019 as we only have Q1-Q3 figures at the time of writing). And Prime (reported as subscription services) was already 5% in 2016 and steadily growing to probably 7% in 2019. 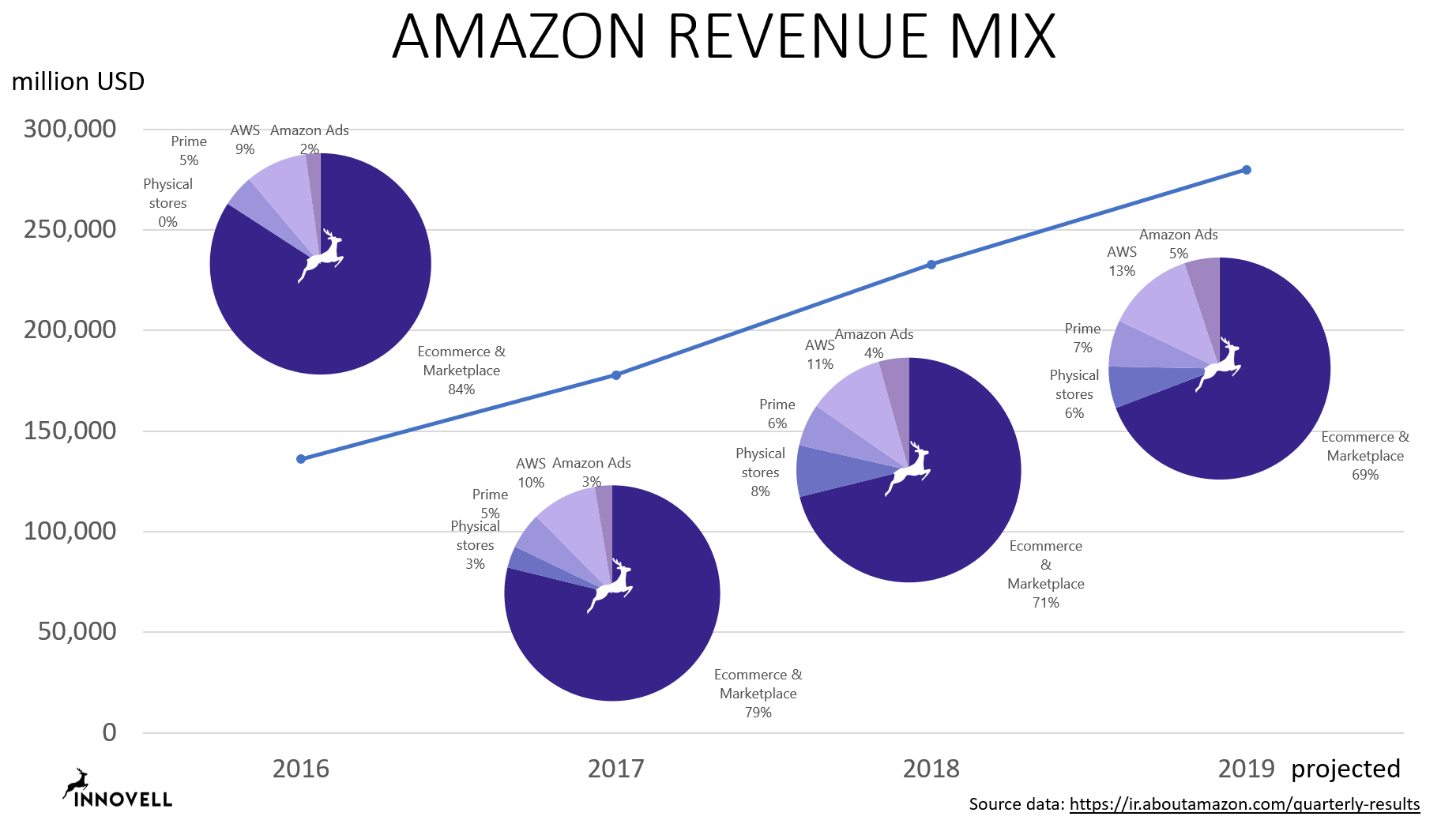 Physical stores took at huge leap in 2017-2018 with store openings and now represent 6-7% of Amazon revenue. All the ecommerce activity related to the physical stores is counted as ecommerce revenue and already included in other growth figures and in Q1-Q3 of 2019 the pure physical store activity has not increased. This segments will likely grow in bumps, as Amazon open more stores.

Low let’s look at one of the really strong segments, namely Prime. Prime is Amazon’s loyalty program with same or next-day delivery which is changing the standard for ecommerce. It is also a Netflix and Spotify competitor and it has a penetration of over 50% of US Amazon users. Prime has experienced growth rates of 35-40% in 2019 but the growth trend has been downward. However, Amazon has invested heavily in Prime adoption in Q3 and Q4 and we may be in for a surprise in Q4 figures. Will they perhaps return above the 50% growth mark ? 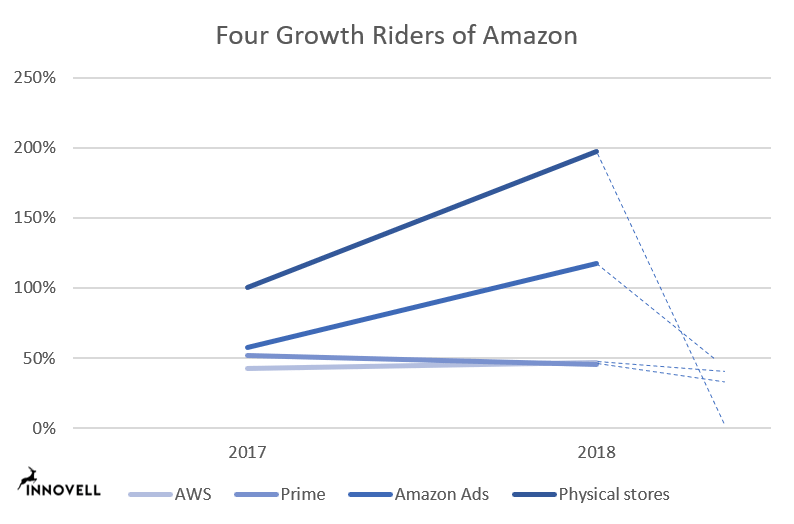 The advertising segment has been one of our focal points in our research for the Amazon Marketing Report and Amazon Ads grew by over 100% between 2017 and 2018. The growth is expected to decrease and trends for Q1-Q3 point to between 35 and 45%. But Ads will have really strong Q4 and we project the year to come out at around the 45% mark. Even so, Q4 is a crazy quarter and  we could be in for a surprise here as well.

Crazy growth but maybe not insane growth in 2019

In summary, we are really in a crazy growth setting with consistent double-digit figures. All growth figures have been seen to slow down a bit for Amazon during the first 3 quarters of 2019 and maybe we will be looking at a scenario where even the strongest segments ONLY grow by under 50% compared to 2018.

Figures will be out on 30 January. We predicted the growth champion for 2019 to have been Amazon Ads, closely followed by Prime 🙂 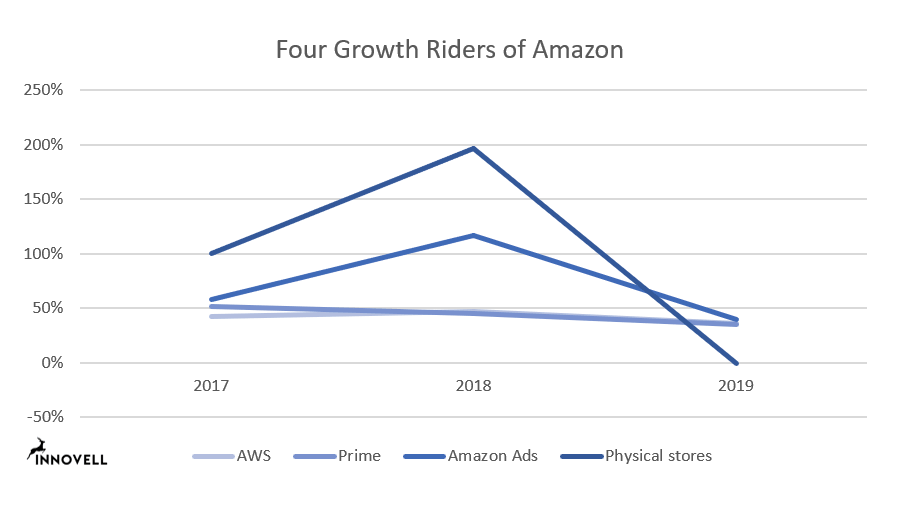 This article is written on the basis of the research we are doing for the Amazon Marketing Report but is not an extract from the report. The report is scheduled to launch on 20 February 2020. Subscribers to the Innovell “Report Alert” newsletter will get a chance to obtain the report for free.