Amazon published its quarterly earnings report last week and I rushed in to discover the massive growth of Amazon Ads, which is the highest growing activity within Amazon. Amazon Ads increased by approximately 44% year on year and thus had slightly higher growth than in the last quarter as compared to the same quarter the year before.

I also made my way by the Google and Facebook quarterly reports to get a feeling for the state of the triopoly of digital advertising. Both are experiencing healthy growth: Google Ads grew 10% and Facebook Ads 17% YoY.

As, in the past, I have strongly insisted on the way Amazon Ads has been catching up on both Google Ads, of which it represented approximately 1/8 in Q4’19, and on Facebook Ads of which it represented almost 1/4 in the same period, I was curious to see whether the trend continued with the increase in growth we noted. To my surprise it was not the case. In Q1 2020, Amazon Ads dropped to a 11,6% of Google Ads and 22,4% of Facebook. A relative decline despite the high growth. 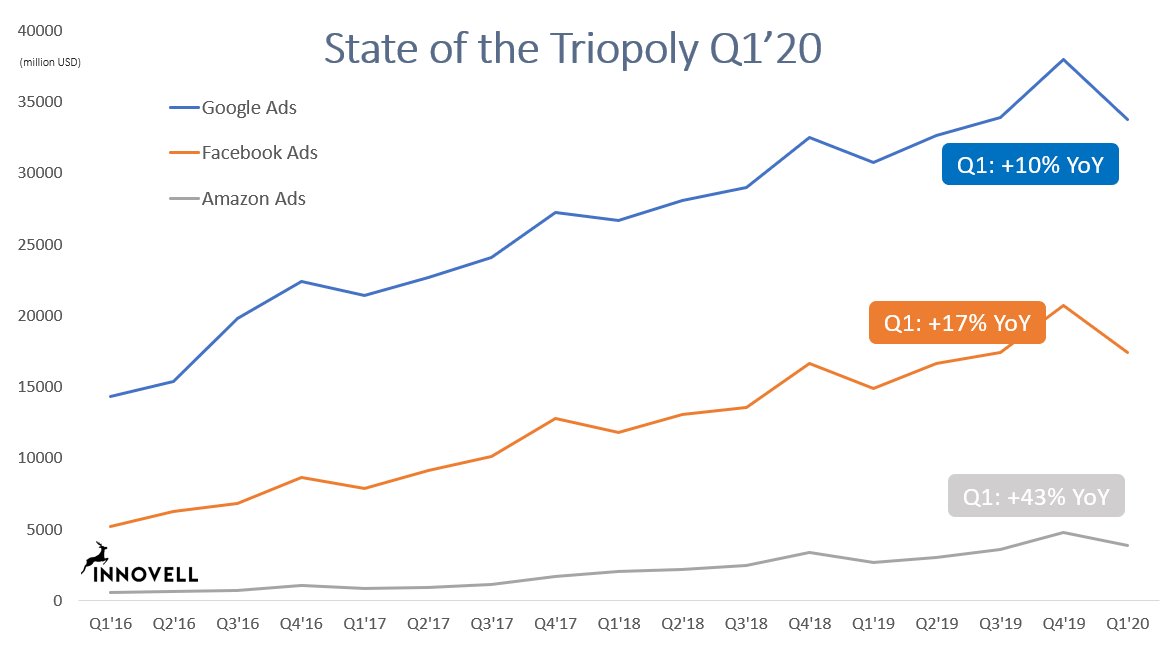 The explanation for this seeming paradox of higher growth but lower proportion, is that Amazon Ads have a higher seasonality than Facebook and Google. All the big internet players have an extremely high seasonality in the last quarter of the year due to the holiday seasons and shopping frenzy. But for Amazon, this is even more pronounced and the relative drop into Q1 is more pronounced as well, as Amazon Ads closely traces the ecommerce activity as shown below: 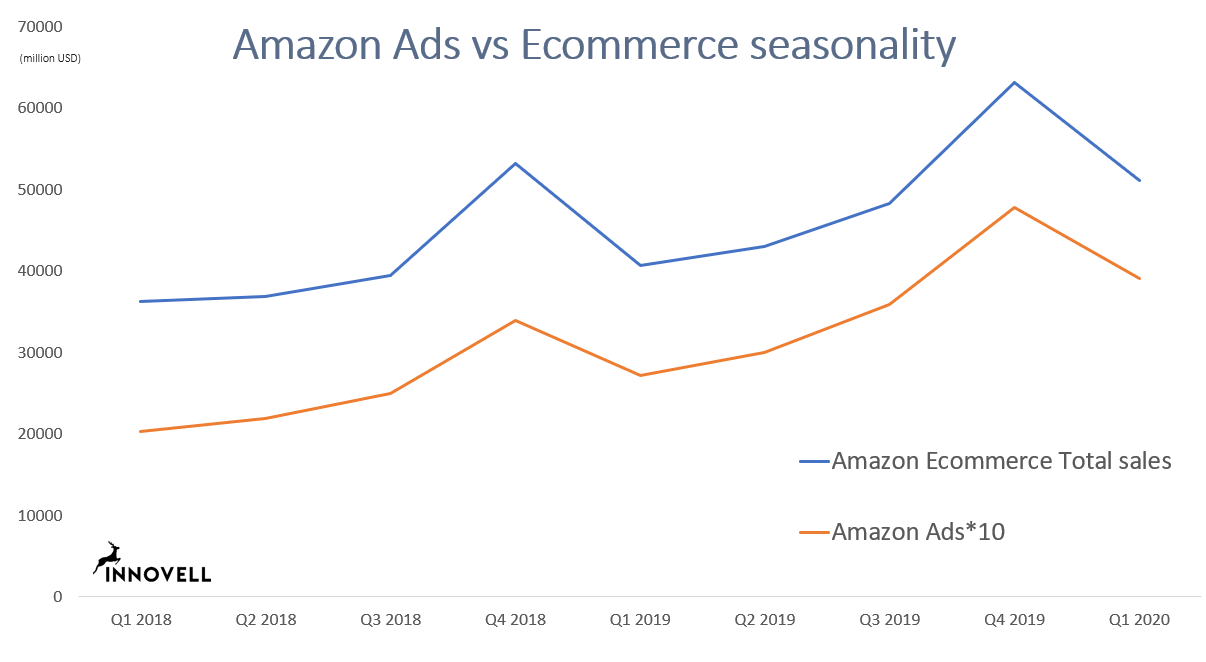 What this tells us is probably that a large majority of Amazon’s ad revenue is in Amazon Sponsored Ads, the advertising which is displayed inside the marketplace (as opposed to Amazon DSP which is mainly outside).

What does this tell us about the future?

The growth of Amazon Ads is strongly correlated with Amazon ecommerce. If Amazon ecommerce continues to grow by 26%, we can expect Amazon Ads to grow at the same rate or higher. Advertising has grown as a part of Ecommerce for a while, and the question is whether there is an upper limit. Within Amazon Advertising, one of the reporting measures is an internal ratio called ACOS: Advertising Cost of Sale. The higher the ACOS, the less net margin a merchant generates. This is a good illustration of existence of an upper limit to how much advertising the system can support.

If the growth for Amazon Advertising beyond the growth of ecommerce, and solely based on the additional growth of the Amazon DSP offering, then we should probably expect to see a slowing of the growth in coming quarters with the floor being the growth rate for ecommerce itself. Currently sitting at 26%.

But with Covid19 predictions are hard to make

However, Q2 results in 2020 will reflect a completely different picture of where both Ecommerce and Ads are going due to the impact of the Corona virus disease which affects both the volume and types of ecommerce and the volume of advertising. In a crisis situation, advertising spend is often cut but in the present situation, there is also an effect of reorientation. There could be shifts from other channels to Amazon and there are definitely shifts between categories of products.

But whatever the Q2 figures will be, they are likely to show a further catch-up of Amazon Ads compared to Google and Facebook whose advertising revenues will likely be more affected in times of crisis. So, despite the crisis situation, Amazon is probably still catching triopoly share at the time of writing.