The biggest and most important Amazon market is without a doubt the US market. It weighs 67% of revenues and grew by 19% in 2021. It will be a long time before any other market catches up. If ever! The three following markets: Germany, United Kingdom and Japan add up to only 20% of revenues. And the remaining 15 active markets 14%. Amazon is top-heavy despite a massive international expansion.

The top four markets are directly accounted for in quarterly earnings report. The following five markets, India, France, Italy, Canada and Spain all had more than 150.000 sellers in their local Amazon marketplace according to this overview of third party sellers by country from Statista, and we checked their traffic and GDP per capita to build an initial list. When we initially shared this, we were made aware of actual measured figures which Edge by Ascential provides us with. To our surprise, India is actually the fifth biggest market ahead of France and Italy. For the tenth position, we initially bet on Brazil, but it seems it is Australia that holds that position followed relatively closely by UAE and Mexico.

Navigating the various marketplaces can be complex on Amazon. And even more complex for ecommerce outside of Amazon. As the formats and functionalities of market places are essentially the same from one Amazon country to the next, there are a couple of practical solutions in place. In North America, sellers can set up a unified account to cover US, Canada and Mexico. And in Europe, a unified account spans Germany, the United Kingdom, France, Italy, Spain, Netherlands, Poland and Turkey. If you are looking to expand internationally, the Amazon’s Global Selling guide is your go-to destination. 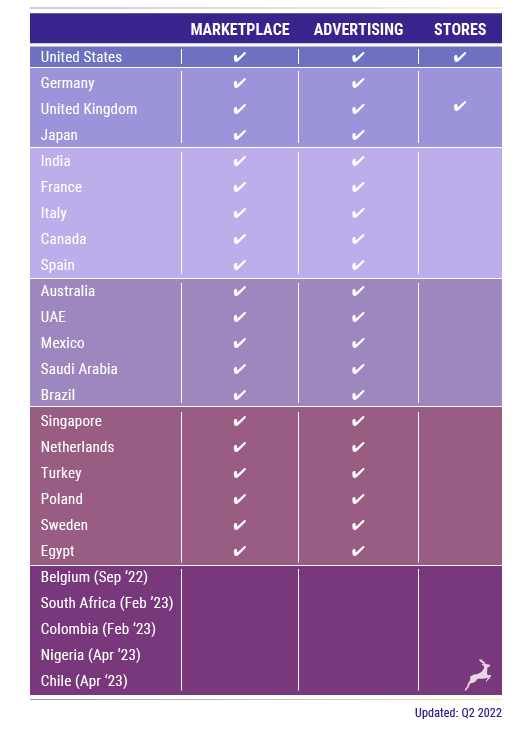 Amazon appears to have a distinct synergy-driven approach to internationalisation where new markets piggy back on existing ones, and where additional features are rolled out progressively. It is also using existing regional strongholds to build neighbouring markets, as proximity is so important to ensure high quality fulfillment. Brazil may enable an expansion into Argentina in South America in the future, and Germany was a key piece in the puzzle for opening Poland. In recent plans for opening in South Africa and Nigeria, those two are part of the same project, just as Colombia and Chile are grouped together.

There seems to be a fair amount of merchant copy and paste going on to get a marketplace up and running. Product listings are autotranslated and made available in a new marketplace to get it going. There must be both ample supply and demand for a market to function.

Once merchants start flocking to the marketplace, the advertising platform is then rolled out. And with the recent opening of the physical stores, Amazon Go in the UK, perhaps the physical stores branch will start trickling down the top market list in the future. Perhaps Germany, Japan, and regional strongholds such as India and Brazil will be next?

Let’s look at some of the ways Amazon markets are growing and how the international expansion strategy seems to be organized below.

Advertising is one of the first powerpack added after a marketplace opens. There are four types of Amazon Advertising, three of which are intimately tied together with the marketplace:

These three are used by merchants to fight competition on the marketplace and boost their sales. As described in our Amazon Marketing Report, these solutions form an integral part of an Amazon marketing system and have been opened to all the recent marketplaces.

Netherlands, Poland and Sweden are recently opened market places and the advertising branch has not yet been launched. Turkey has been around longer but it is characterized by a small Amazon market share.

The fourth advertising type is the Amazon DSP, the demand side platform allowing advertisers to advertise inside and outside the Amazon platform and a CPM (cost per thousand impressions) model. Amazon DSP could in principle be launched independently from the other ad types, but in practice it seems to tag along with the other types or shortly after.

We have a hunch that the roll-out of Amazon’s loyalty program, Prime, follows approximately the same pattern. In Europe, Prime was launched first in the UK in 2007, in France in 2008, Italy in 2010 and Spain in 2011. The trickle down pattern is probably similar across other markets.

What will be the next Amazon market to open?

In recent years, new market places have opened or absorbed in a number of countries: Turkey, Singapore, Saudi Arabia, Egypt, Netherlands, Poland and Sweden. And in a recent article for Business Insider, plans for further expansion were leaked with Belgium up next in 2022 and for next year the plan includes South Africa and Colombia and then Nigeria and Chile.

The launch plan for 2022 – 2023 goes like this according to Business Insider:

Worldwide domination is still far away

Amazon is experiencing amazing growth, its ad offering is penetrating the triopoly of digital advertising consisting of Google, Meta and Amazon Ads. Physical stores are breaking down the barriers between online and offline retail. But when we look into the details of the domination, Amazon is very top heavy and has a long way to go before it reaches the same level of market power in worldwide markets. As we exposed in our recent report “State of Retail Media 2022”, local Amazons often face competition in the form of local pure players such as Allegro in Poland and Cdiscount in France. They also face vertical marketplaces such as Zalando in beauty and fashion or ManoMano in DIY.

It is interesting to note, though, how the constant progression of Amazon in international markets reinforces existing strongholds and markets as it goes. It may take a while, but the machine seems unstoppable.

If you are aiming to build a more full understanding of Amazon marketing, you find a complete coverage in Innovell’s “Amazon Marketing Report”.

There are no upcoming events at this time.