My Day in Cryptoland seeing the Future of Money

Yesterday I opened the door to Cryptoland, the Magical Kingdom of Bitcoins, as a complete cryptocurrency virgin by going to the Inside Bitcoins conference here in Paris. It felt like entering a very exclusive club made up of old friends from all sorts of horizons who shared the same peculiar vocabulary as well as the same glint in the eye. The glint of passion.

Back in 2009 when the World was in deep financial crisis, a founding article was published by someone named Satoshi Nakamoto. It wasn’t known who this Satoshi really was – a genius developer, a government agency, or possibly a group of developers. More of that story on Wikipedia: http://en.wikipedia.org/wiki/Satoshi_Nakamoto. Despite a lot of speculation, it remains uncertain to this date who or what Satoshi is and perhaps his absence is useful for something meant to be completely decentralized. His spirit is still present although he retired from active participation apparently with a small capital of one million bitcoins. The mystery only adds to the magic of Cryptoland.

Birth of an Orphan

The article Satoshi published can be found here: bitcoin.org/bitcoin.pdf and is not for the common mortal to read and enjoy. What I understand from the 9-page document is the detailed description of a totally transparent internet-based monetary transaction system by which blocks of data are being validated by nodes in a network in real time. These nodes are computers and for each transaction, the original code of each monetary unit is reprocessed. If anyone tries to attack the network they will have to mobilise more processing power than the network itself.

After Satoshi published the paper, he also launched the network and created the first bitcoins. Later he faded out and transferred both the opensource code, the bitcoin.org domain and other assets to key members of the community.

An essential part of the network is the computing power of the nodes that verify transactions. The computers that participate in this work are called “miners” – possibly because they work very hard and get paid very little. Every day a limited number of bitcoins are being released into the economy through the miners as payment for the work they do. This helps make the bitcoins a scarce digital commodity, according to Nicolas Carey, blockchain.info, speaker on Inside Bitcoins.

On the Inside Bitcoins conference, I got to see what these miners look like.

… and the words they spoke were fascinating as they discussed hashpower and electricity prices.

They consider their activity as an Industrial activity where you invest in computing power and try to reduce operation cost to generate income over time. It seems computer chip manufacturers have a hard time keeping up with the Miner’s requirements for raw processing power and low heat emissions. Marco Streng from Genesis Mining explained how they had chosen Iceland for their servers because of a steady and cheap source of electricity and easy access to cooling. Perhaps a case for reindustrialization in Western Europe.

And we have take-off

Bitcoins took off massively back in 2009. As an example, the number of transactions on bitcoins for the first 3 years grew exponentially to make the growth rate of Paypal look pale in comparison (Nicolas Cary, blockchain.info on Inside Bitcoins). Perhaps, however, we are not comparing similar things as Paypal is merely a mode of payment whereas transactions of bitcoins can be of speculative nature.

When looking at the growth, there are 2 main things to look at. The number of transactions on one hand and the value of these transactions measured in another currency. With a gradual and continuous growth of transactions and an important level of volatility tied to a currency and furthermore a “new” currency based on a “new” technological approach, it seems logical that growth can be explosive.

The system is designed to progressively increase the circulation of bitcoins and reach an upper limit of 21 million bitcoins some time in 2040. Each bitcoin can be divided into a maximum of 8 decimal points. Today the market value is estimated at some 5 billion dollars – it is starting to become comparable to the GNP of a small nation-state.

The market value continued to increase and virtually exploded in November 2013 as can be seen in the chart from Blockchain: 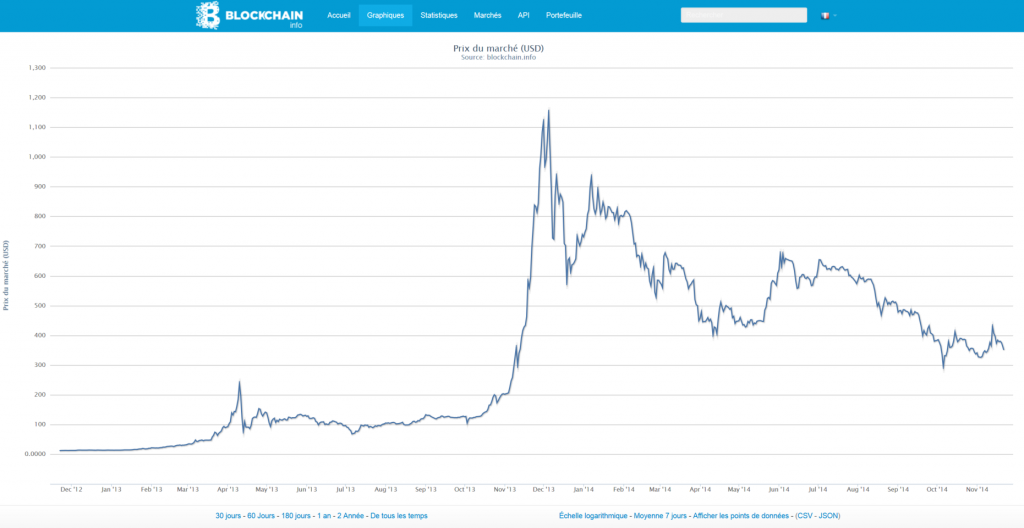 But we also notice the subsequent decline. Was it a bubble? Is the show over? Most of the experts refer to the peak as having been caused by the Cyprus bank lock down where international account holders would suddenly use massive amounts of bitcoin transactions to circumvent the system. This peak is believed in turn to have been enhanced by automatic trading and possibly insider operations causing a partial collapse as well as a loss of credibility in cryptocurrencies around the world.

Bitcoin with a Capital B

But really, the currency and its fluctuations are very superficial elements of a much deeper concept and a much more powerful underlying motion. Bitcoin is 2 things, or rather Bitcoin with a capital B is the protocol on which money transactions are performed, whereas bitcoin with a lower case b refers to the currency (analogy from Elie Chevignaud on Inside Bitcoins). It is this latter bitcoin, the currency one, which is all the media and the general public care about.

The underlying motion of the Bitcoin (capital B), however, is where I saw the Future today. The protocol and the totally decentralized and independent nature of the Bitcoin approach is disruptive in its nature and possible a fix to a broken financial system. Of many great examples, Nicolas Cary addressed opportunities in relation with developing countries and money transfers. In his words: “Cash is inconvenient, a poor user experience, insecure and limiting” and subsequently “So why is 85% of the world’s money transactions still performed with cash?”

Additionally, fees on cross-border money transfers can surpass 20% commission whereas a cryptocurrency like bitcoin only require covering a cost of around 1%. There is a strong case for disintermediation and if I were in the International cash transfer business, I would probably start looking for another business area like Juan Llanos, Bitreserve.org did a few years ago.

An open and transparent system for financial transactions across the globe where nobody sits on the gold deposit seems like a very compelling solution. A system where nobody is “too big to fail” because they are central node in a dysfunctional system. The “too big to fail” is considered an anomaly in our capitalistic society by Hakim Mamoni of Seedcoin.

Our Future of Decentralization

A decentralized financial system like the one promised by Bitcoin, could be one of the building blocks of our future society. Hakim Mamoni takes us through the various areas of Human activity in which decentralization seems like a promising solution to many of today’s problem. In Water supply, in Food, in Energy and in Communication, decentralizing technologies are providing solutions that only require one last thing to fulfill their promise: Legal and Regulatory adaptions to allow for power to move away from the center.  But as we know, power shifts are the more difficult changes to make in any society.

So how do we make it happen?

In the same way the Internet revolution changed the way we produce, distribute and consume information, it looks to me like the Bitcoin protocol, the cryptocurrencies, the underlying technologies like the blockchain, as well as the amount of innovation in this space are announcing a complete change in the way we store, transact and manage money.

The challenges to address are likely to be 3-fold and interconnected: regulation, investment and compelling applications. Let’s go.